All roads lead to Rome

A lovely fresh morning with the sun shining we left Florence, walking back to the train by the Uffizi, the Palazzo Vecchio and the Duomo off to Rome. We also had the opportunity to have a chat with my wonderful mum to celebrate her birthday. Travelling makes it really clear what is important in life and we would not be able to be here without her, along with others, support to keep things going back home - love you mum. 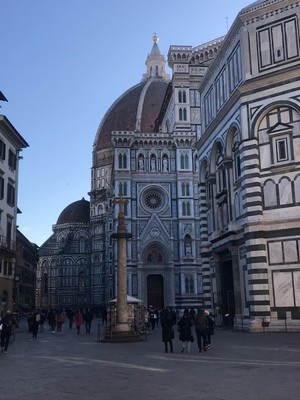 Train travel in Italy is easy, usually on time and excellent communication when on board. Our trip to Rome was a little longer due to an alternate route, we found out later that night that there had been a derailment accident early in the morning between two trains resulting in fatalities and significant number of injuries. Arriving at the Rome Terminus it is unsurprisingly large, similar to what you would find at an airport with shops and lots of different food options.

After a quick pasta and tiramisu lunch we headed off to find our apartment. We often comment about the gloriousness of google maps, which is on point each time compared to old school - that is getting lost, asking for directions and looking at signs which are our back up. Traversing the back streets, we arrived to a little artery off the Colosseum which is full of restaurants and cafes along with Roman ruins that in its heyday would have supported the games, as a gladiator training school, at the Colosseum. In Rome it appears that there are reminders everywhere of the history of this place. An afternoon stroll past the Colosseum, the Arch of Constantine and explore of one of the local churches was a good way to end the day. 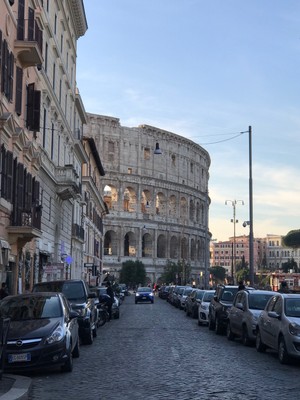 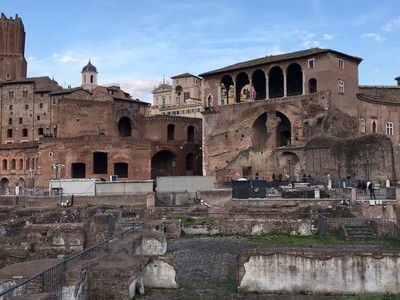 A later start to the morning, including an early lunch as we joined a LivItaly tour, a small boutique tour of no more than six people means you have a more personal interactional experience. The tour visited the Colosseum, its arena floor and underground and we entered the arena through the Gladiators gate. We learnt that the area was repatriated by Emperor Nero after at least a third of the city was razed by fire, potentially or maybe not lit at the Emperor’s orders. Emperor Nero subsequently built a big palace including an artificial lake on the site of the Colosseum which understandably did not endear the population. 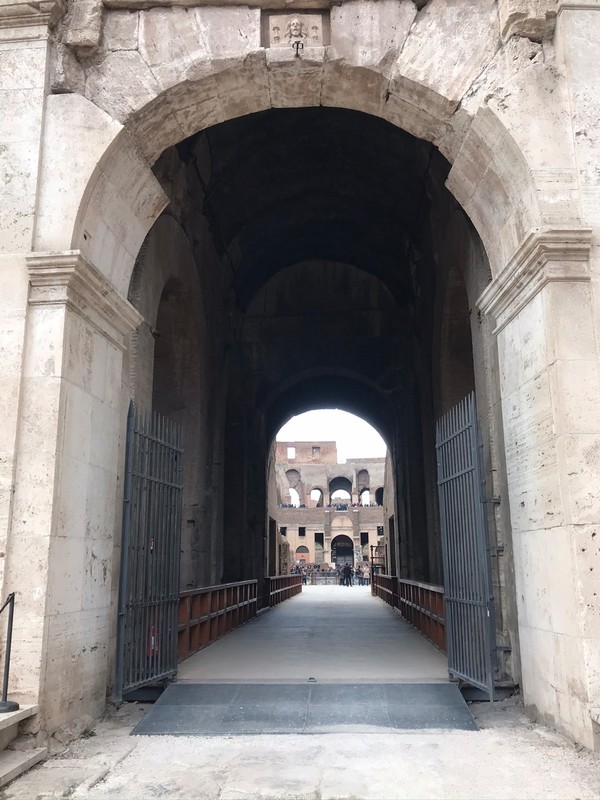 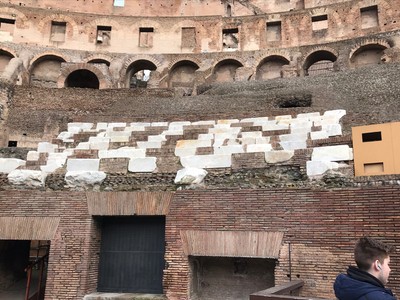 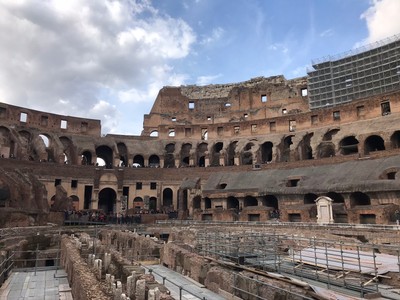 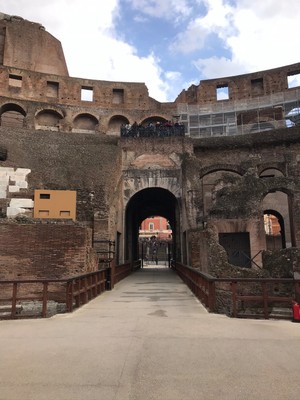 The Emperor Vespian commissioned the Colosseum, known as the Flavian Amphitheatre, as a gift to the people of Rome, in essence providing them their land back in a public way that enabled free entertainment for all. In short a political pitch that was delivered visibly and enabled ongoing entertainment as sponsors hosted games. The Colosseum was built within eight years and opened in the year AD 80, by Vespian’s son Titus, with 100 days of games including gladiatorial and wild animal combats. The name Colosseum was adopted as there used to be a Colosseo bronze statue, up to fifty feet high, half the height of the current Colosseum nearby.

The Gladiators gate entry had stairs approximately half way down on either side, along with the arena’s expansive trap doors and pulleys which are mirrored on the other side of the arena floor enabling gladiators to appear like magic. The Gladiator gate is also known as the loser gate as the gladiator (not often) or the numerous animals exited under its arch deceased. Underneath the arena various chambers were introduced as the work house with areas for gladiators, wild beasts and their handlers in niches that had fresh running water and enabled a well orchestrated theatrical show of a grand scale. On each side of the arena there was lift capacity, where they would release multiple exotic animals that had been starved and constantly antagonised ready to attack. Areas for archers are also present should an animal decide it would like to attack the crowd. Tiles with numbers have been found on site which amongst other things could have been used to release the various groupings of animals around the arena simultaneously. 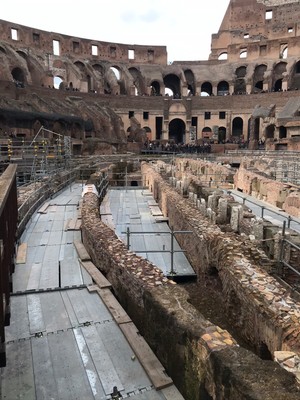 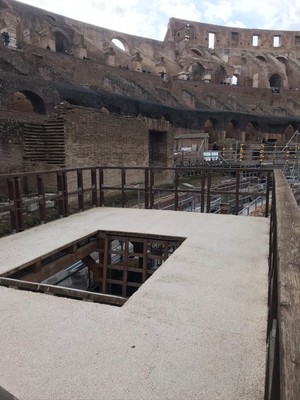 The building has lived through earthquakes, its materials such as seating and blocks being repurposed within Rome and Vatican City with the Northern side the best preserved. The building capacity is approximately 50,000 and could be filled within 15 minutes through its many arches and the incline of the stairs. It is truly a magnificent structure in the day and night and is less than 50 metres down the road from our apartment. 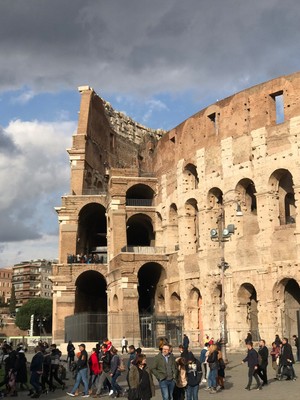 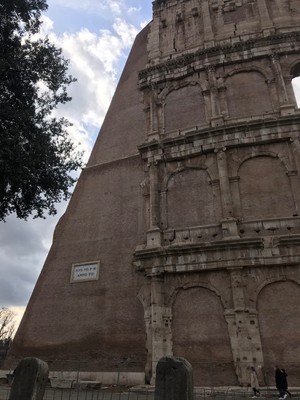 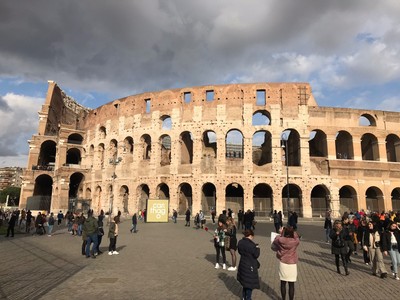 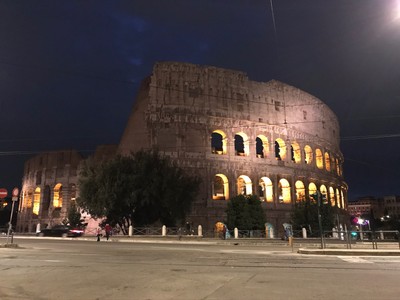 Our tour included some commentary about the Arch of Constantine, a triumphal arch to celebrate Emperor Constantine’s win at the Battle of Milvian Bridge, significant due to the inequity of the fighting armies and the Emperor’s divine vision and actions before the battle. Close by is the Archaeological site which covers Palatine Hill and the Roman Forum which was our last stop of the tour. The sheer scale of ruins across the site is amazing and to understand these were buried underground before their excavation. The significant difference visible in the height of current and yesteryears ground level is reflected in the various buildings and today’s street level. We also visited the two other remaining Roman arches, the arch of Titus and the arch of Septimius Severus, along with viewing columns of temples (some more complete than others and dating back as far as 5bc), the one with the bronze doors framed by Egyptian porfrey below is the original doors from 4bc (the key located thousands of years later and still works), the private stadium of Caesar (what is thought to be the imperial box on the left side) and in the Roman forum standing in front of the very few remains of his palace. While there are some accounts of what Rome was like 2000 years ago, at the archeological site imagination is required to consider what might have stood in place and the adornments of marble, frescos and colour that would have denoted the area. 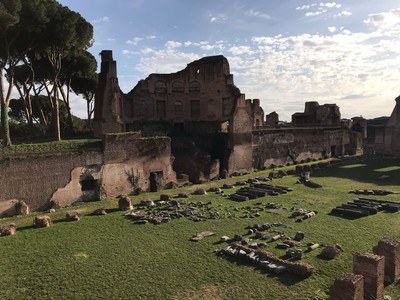 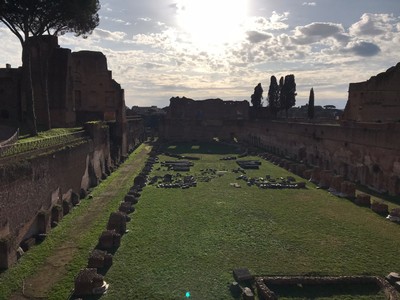 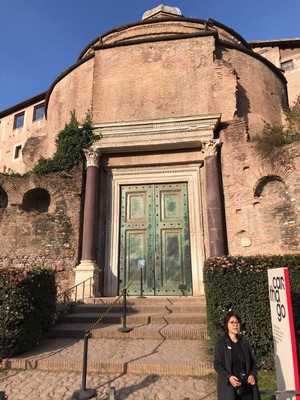 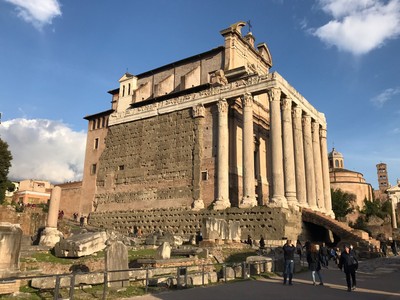 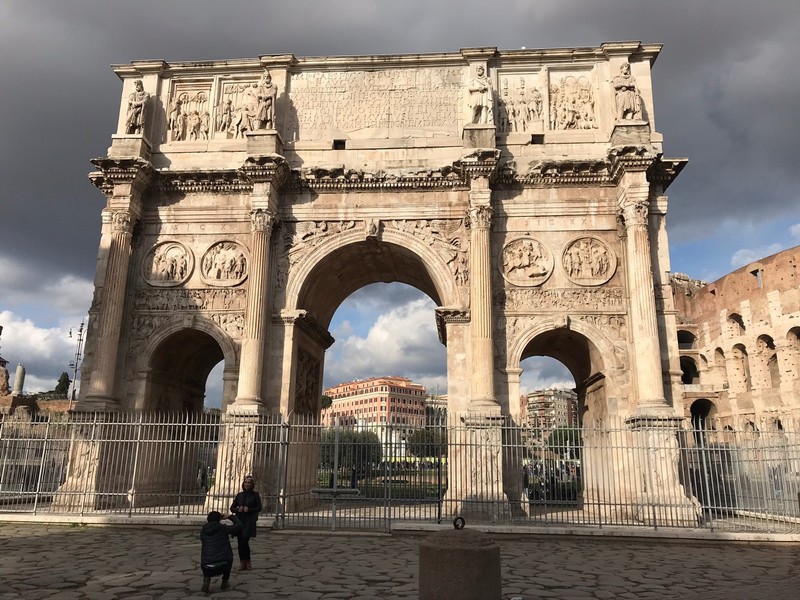 Rome is an amazing place and it is hard to imagine its magnificence in times past! It was a cruel but exciting time!